Back to Main Laboratory

So go on and shine your dancing shoes and butter your cup-cakes for the Frankenskippy performance and multimedia page!

The humanoid form in action has a direct relationship to production geared choreography and the animated structure of form in action.

Lars acting as AKA Dr Frankenskippy presented his works and fine VFX Elixirs for several Film & Animation events. He has been invited to present in several prestigious festivals around the world and the presentations were via a theatrical performance playing the part of Dr Frankenskippy narrating the ‘making of’ several of the directorial portfolio works.

Below are some piccies from a convention in Germany.

Lars has enjoyed key involvement with multi-media group Scratch My Nose, alongside group partner Tim and other collaborators; Challenging complacency in the Arts.

Both Lars and Tim were involved with the underground/alternative live music circuit as well as other artistic pursuits. Musically and indeed performance wise they both enjoyed flying in the face of the norm of the time. Lars played in hardcore punk band Public Nuisance in the early to mid 1980’s and Tim in Driptray. Both feeling an ‘itch’ to challenge what they saw as complacency in the arts (and complacent mindsets in general), the performance aspect of live gigs merged with their film (scratch videnose) and street art interests until the itch became insatiable as Scratch My Nose.

Scratch My Nose (hereafter known as SMN) is a multi-media group who have created and directed over 30 major projects in many different disciplines incorporating film, performance, street art, radio and sound. SMN’s unique and innovative approach always seeks new creative platforms to question and challenge common perceptions by confronting and humouring its audience. Over the last 25 years SMN has defied conventional approaches to art making in endlessly inventive ways. While their signature style falls against the grain of their contemporaries, their ‘jump-cut slash-together’ aesthetic is unique and immediately recognisable.

“Wild. Unlike anything I have heard really” – Thurston Moore (Sonic Youth)

Fans of SMN would constantly remark on the sound aspect of their performance geared work and so they decided to write/record an album entitled Screw.

Play the sample ‘theme’ track from the album below.

Radio sessions in Sydney and NYC

SMN then took their sonic anarchy to radio stations as DJ’s for local Sydney radio station FBI and the popularity of the show saw them invited to present sessions for WFMU in NYC, USA.

2. Videnose – portfolio of some SMN film and video production

At what was known as the Artery Gallery in Sydney SMN were invited to perform. They staged a wild surreal entry arriving in a Mr Whippy van and involving the internal gathered audience at the opening with wild lights, surround sound and theatrical performance.

SMN Performance ‘box’, based on a Nickelodeon Machine (like the old ones in fun parks with clowns heads that you wind up and play a cacophony of ‘clinking’ noises). The coin (‘nickel’ in days of old hence name) goes in the slot, the curtain opens and it’s noise-noise-noise accompanying a series of wild ‘food gags’ that will have the audience ‘gagging’ for more. Gags included regurgitating and spitting out all sorts of foods and liquids, popping balloons and popping the with a lit cigarette, licking the screen with ox-tongues (strobe light for effect). The show would appropriately start/end with an ‘out of order’ sign.

Side-show freak-show meets Peter Greenaway’s The Cook, the Thief, His Wife & Her Lover

This box was capable of extreme noise (with power guitar amp within) and was seen as a ‘side-show’ in various Sydney rock (and other) venues in the late 80’s and into the 90’s. 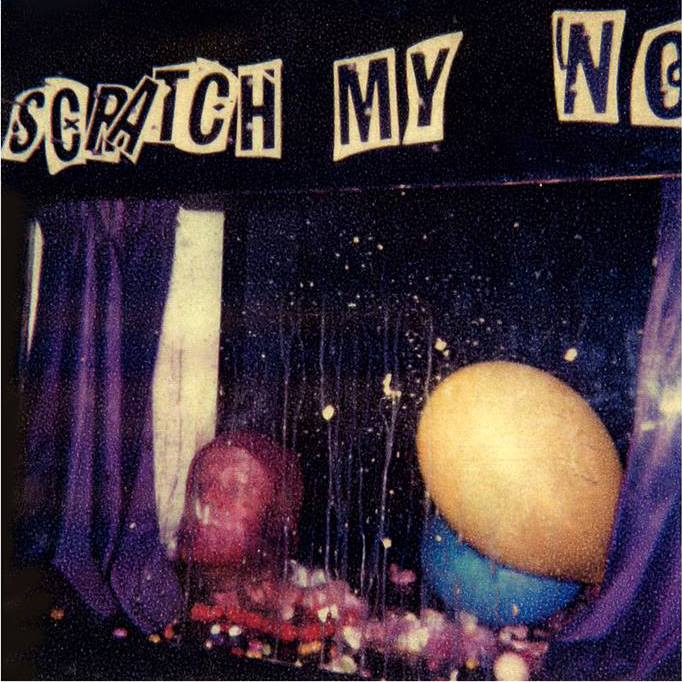 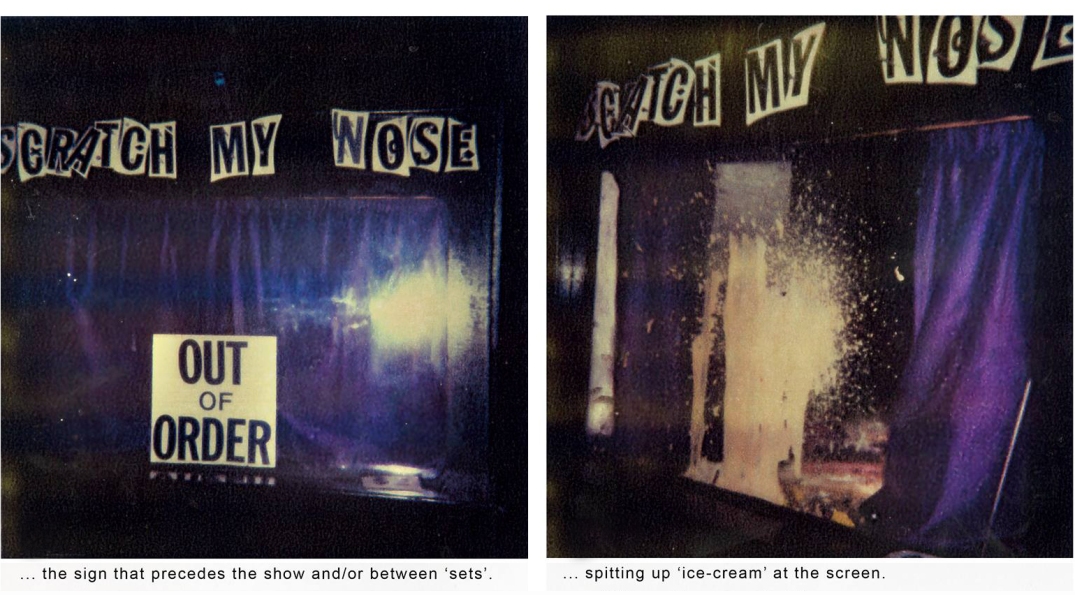 Posing as the supporting ‘road-crew’ setting up for the main act, SMN turned the ‘test 1-2’s’ into complete chaos with sonic assault and most comically, charging into the audience to gaffer tape the unsuspecting bar (invited) attendees to the bar and gathered groups to their respective chairs and tables. 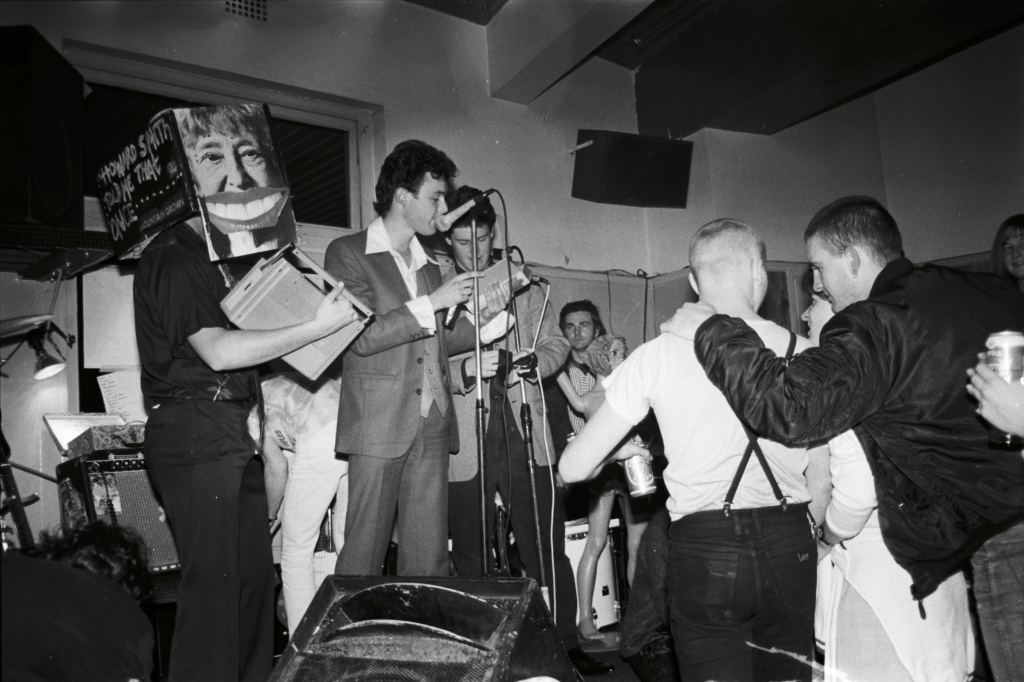 … and now moving brusquely onwards or rather backwards with a touch of sidewards!

Back in the early 80’s Lars and a gang of local skaters found the initial exhilaration of shaking the neighborhood with the crash ‘n’ skid backyard mayhem of ramp riding transitioned rather seamlessly into the chaotic stripped down raw and dirty DIY approach of the Hardcore Punk scene and so hence finding any means of amplification with the perk of dialing up the volume to 11 would suffice and plugging in the rusty old mike into the lead guitar ‘B Channel’ was assumed the obvious solution when the dodgy auction bought 8-track proved only to have one or so functioning channels.

Public Nuisance (the only lasting name from a long list which stuck like mud to the proverbial wall) kicked off circa 1981 and short circuited 1985; freaking out local house parties and banned in style from pretty much every venue we played.

No one was stupid or sober enough to catch us on super 8 or other video means, although the odd piccy and demo’ tape (yes, we’re talking vintage dusty ol’ cassettes) along with dirty recordings of gigs exist, so will upload soon. 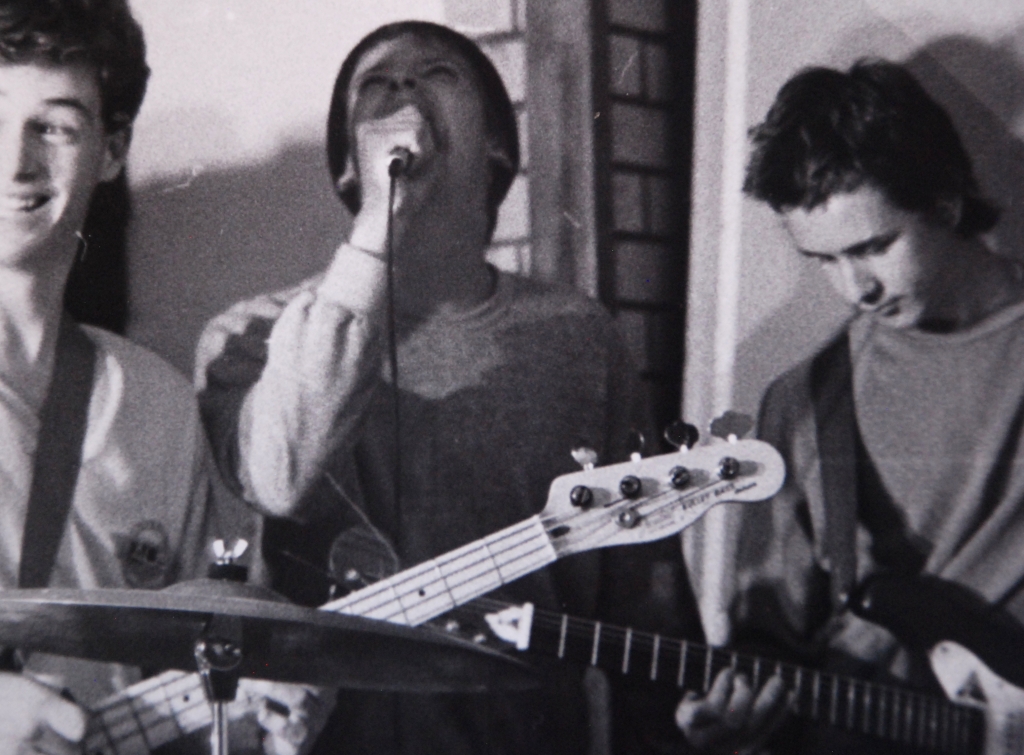 Lars scrawled the lyrics and sings on this early demo version of this song post being invited to audition by buddy Grizzlee of band Dragnerve.

Coming from more punk/hardcore roots Lars added that edge to the vocal style here in this punker-metal fusion.

Dragnerve were fab’ live in London with some great gigs at fav’ stomping grounds like the Purple Turtle.

Note; the video editing style utilizes some rapid-fire frame cutting for anyone sensitive to such visuals.

Looking for fast-fun during his wee  teen years, Lars found appeal via DIY sub-cultural outlets such as skateboarding the local streets, home-made ramps and half-pipes with a background noise of the time being R&R early sludge metal and punk rock  ‘hummmmm ahhh grrr huh’ that became a break neck beat as he turned his focus from skating to fronting a Hardcore Punker band back in the early 80’s spawning several noisy anarchic assaults to the visceral senses.

Further to the live music and music scene, Lars has been involved with Performance Art and Multi-Media groups.